Products Home > About us > Applications > Catalytic hydrogenation of Petroleum (petrochemicals) >

The purpose of petroleum hydrofining is to remove sulfur, nitrogen, oxygen and other heteroatoms and metal impurities from oil products, and to hydrogenate and saturate some aromatic hydrocarbons or olefins to improve the performance of oil products.

Hydrofining can be used for refining gasoline, kerosene, diesel oil, lubricating oil, paraffin oil, various intermediate distillates, heavy oil and residual oil. In addition, hydrogen can also be used for partial hydrogenation saturation of aromatic hydrocarbons in jet fuel, hydrodesulfurization of fuel oil, heavy metal removal from residue and pretreatment of deasphalting. The process of hydrofining of various oils is basically the same (see figure). The feedstock is mixed with hydrogen and heated to a specified temperature in a heating tower and then into a fixed bed reactor with a catalyst. After the reaction is completed, the hydrogen is separated from the separator and circulates through the compressor. The product separates hydrogen sulfide, ammonia, water and gaseous hydrogen produced by a small amount of decomposition in the stabilization tower. 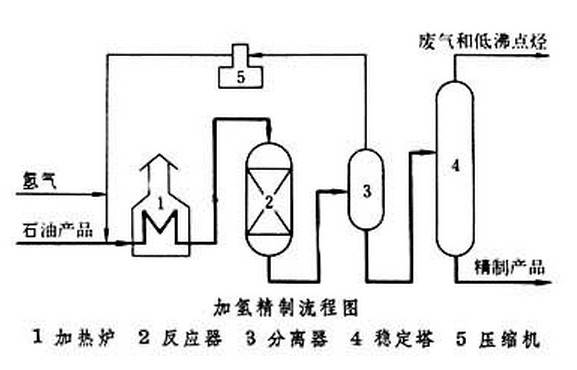 4）Hydrogenation saturation of olefin and Aromatics

Under hydrogenation conditions, most olefins react with hydrogen to form alkanes, and polycyclic aromatic hydrocarbons can be partially hydrogenated saturated.

The general formula for hydrocracking of alkane can be expressed as：

Olefin hydrogenation is mainly the production of saturated alkanes and reforming isomerization. Macromolecular olefins can be further cracked to form small alkenes and then hydrogenated.。

Residue hydrotreating technology refers to the hydrotreating process in which a certain conversion reaction takes place under harsh conditions. China Petrochemical Co., Ltd., a subsidiary of Fushun Petrochemical Research Institute, has been exploring this technology since the mid-1980s. After more than ten years of efforts, China has finally developed its own new residue hydrotreating technology. The technologies include residue hydrodesulfurization, heavy distillate hydrodesulfurization, catalytic cracking feedstock and circulating oil hydropretreatment and intermediate distillate hydrotreating. The aim is to remove the toxic components (sulfur, nitrogen, heavy metals, etc.) from the raw materials, and to convert the residue with higher hydrocarbon ratio into the light components with lower hydrocarbon ratio and diesel oil.