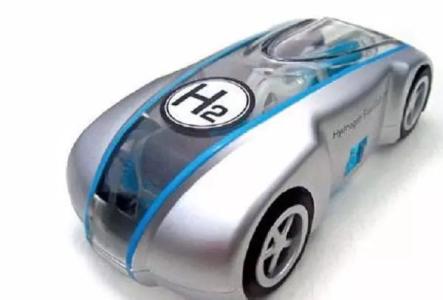 Hydrogen powered vehicle is a vehicle that uses hydrogen as the main energy. In general, internal combustion engines usually include diesel or gasoline, while hydrogen vehicles use gas hydrogen instead. Fuel cells and motors will replace ordinary engines, namely hydrogen fuel cells.

The principle is that hydrogen is fed into a fuel cell, and the electrons of hydrogen atoms are blocked by a proton exchange membrane, and then transmitted from the negative electrode to the positive electrode through an external circuit to become an electric motor driven by electricity; however, protons can be discharged through a proton exchange membrane and oxidized into pure water mist. This effectively reduces the air pollution problems caused by other fuel-fired vehicles, and high-speed vehicles, buses, submarines and rockets already use hydrogen in different forms. On the other hand, energy has always been a problem, in recent years, the international hydrogen-fueled "fuel cell engine" technology has made major breakthroughs, and "fuel cell vehicle" has become a "hydrogen economy" engine.

Hydrogen as a fuel has many advantages, first of all, clean and hygienic, the product of hydrogen combustion is water, will not pollute the environment, followed by hydrogen in combustion than gasoline heat. In 1965, foreign scientists had designed a hydrogen powered vehicle that could run on the road. China also successfully built the first hydrogen-powered vehicle in 1980, which can ride 12 people and store 90 kilograms of hydrogen material. Hydrogen vehicles have a long journey and long service life. The greatest advantage is that they do not pollute the environment.

Hydrogen is a fuel that can replace petroleum, and its combustion products are water and a small amount of nitrogen oxides, with little air pollution. Hydrogen can be produced from the gasification of electrolyzed water and coal in large quantities, and the automotive engine need not be modified greatly. Therefore, hydrogen-powered automobiles have broad application prospects. To popularize hydrogen-powered vehicles, three technical problems need to be solved: mass production of cheap hydrogen, the traditional electrolysis method is expensive, and consumes other resources, which can not be popularized; to solve the problem of safe storage and transportation of hydrogen; to solve the high-performance, low-cost hydrogen supply system needed by automobiles. At present, there are three kinds of common supply systems, the timing of the gas pipe injection, low-pressure cylinder injection and high-pressure cylinder injection. With the development of hydrogen storage materials, a new way for hydrogen powered vehicles will be opened up. Recently, scientists have developed efficient hydrogen fuel cells, which reduce the loss of hydrogen and heat loss.